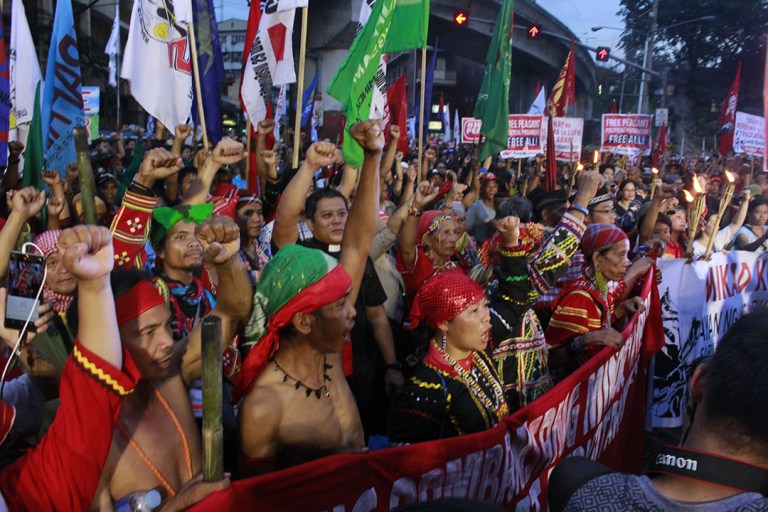 Since October 8, indigenous and Moro protesters have been in the streets for Lakbayan (Journey) of National Minorities for Self Determination and Just Peace or simply Lakbayan. Delegates from southern Philippine island of Mindanao and from the northern part of the country converged in Manila, the country’s capital, on October 13 a few meters away from the presidential palace.

This is not the first time that indigenous peoples have journeyed to the capital. The first Manilakbayan in 2012, as the protest caravan was then called, was staged by 100 Lumad to call for a moratorium on large-scale mining in ancestral lands and a halt in the spate of extrajudicial killings of indigenous rights activists.

Since then, it has been a yearly activity. This is the first time, however, that issues of the Muslim Moros are included and highlighted in the Lakbayan.

It is also in Mindanao where one can find the largest concentration of the country’s five million Moros. Moro is the term used to denote the Muslim population of the Philippines. Though they are also of indigenous descent, they are considered as a different group of people from other indigenous peoples due to their religion and way of life. Together, indigenous peoples and Moros are called national minorities in the Philippines.

The Moros and indigenous peoples have a long history of resistance and struggle against colonization. Spanish, American and Japanese invaders were met with resistance, most notably by the Igorots from the Cordilleras and the Moro and Lumad in Mindanao.

Though their resistance failed to achieve freedom for the Moros and indigenous peoples, this history of sustained struggle continues to fuel their fight for self-determination until today.

On the road to self-determination

The right to self-determination of national minorities is supposedly assured in Philippine law through the Indigenous Peoples Rights Act (IPRA) of 1997. The country is also a party to the United Nations Declaration on the Rights of Indigenous Peoples (UNDRIP). Yet experience has shown that the Philippine government has failed national minorities in terms of recognizing their right to self-determination.

“The law is worthless,” Piya Malayao said in an interview, referring to IPRA. She is the secretary general of Katribu, a national alliance of indigenous peoples organizations in the Philippines. She is also a Kankanaey from the Cordilleras.

The IPRA and government agencies tasked to implement it have been criticized for failing to protect the rights of national minorities and of promoting development aggression. On the other hand, the creation of the Autonomous Region of Muslim Mindanao (ARMM) in response to the Moro people’s clamor for self-determination has so far proven to be a “failed experiment.”

“This Lakbayan demonstrates the unity of national minorities in asserting our right to self-determination,” Malayao said. “ We demand the right to self governance, the freedom to practice our way of life, and the full control of our resources.”

Corporate interests, with the aid of the Philippine government, have also undermined further the right of national minorities to self-determination.

The Philippines is richly endowed in natural resources, with recent estimates showing the country’s untapped mineral reserves valued at over USD 1 trillion. Benigno Aquino, the country’s previous president, made extracting these mineral reserves through large-scale investment a national priority. This has led to a scramble in mining applications by companies determined to exploit these natural resources. Of the nine million hectares identified as having high mineral potential, only three percent or 900,000 thousand hectares, are covered by mining tenements. A small percentage, to be sure, yet almost all of these lands are located within ancestral territories. In addition, this figure does not cover the applications that are still being processed by the government.

And it’s not only mineral deposits. USD 600 billion worth of natural gas is located in Liguasan Marsh, part of the ancestral domains of the Moros. Megadam projects such as Jalaur and Pulangi V threaten to displace thousands of national minorities and submerge thousands of hectares, which will mean a loss of income and destruction of ways of life for many tribal people.

Anti-mining advocates have found an ally in Secretary Gina Lopez of the Department of Environment and Natural Resources (DENR). Lopez has recently suspended 20 mining firms that violated government safety and environmental regulations, and has promised to stop more.

Rights activists are thankful but say that this, however, is not enough.

“The Mining Act of 1995 has to be abolished, large-scale destructive mining stopped, and protection of ancestral lands guaranteed,” asserts Abigail Anongos, an Ibaloi woman and secretary general of the Cordillera Peoples Alliance (CPA).

The Mining Act of 1995 has been widely criticized by various groups for legalizing the exploitation of resources in ancestral lands by large foreign corporations, thereby severely threatening the ways of life of indigenous Peoples and national minorities.

Activists and supporters of the rights of national minorities protest the continuing non-recognition of their right to self determination in front of the presidential palace in the Philippines. (Photo by Sham Astudillo/IPMSDL)

As national minorities assert their right to ancestral land and to self-determination, militarization has intensified in their communities. The Philippine military has gone as far as creating paramilitary groups in order to silence indigenous and Moro resistance.

The most brutal of these is the execution of Emerito Samarca, head of the award-winning Alternative Learning Center for Agricultural and Livelihood Development (Alcadev), along with Lumad leaders Datu Dionel Campos and Bello Sinzo on September 1, 2015. Eyewitness accounts pointed to military and paramilitary forces as the culprits behind the killings.

Heightened militarization has resulted in the displacement of over 100,000 indigenous people in the last six years. On the other hand, the shadow report submitted to the United Nations Office of the High Commissioner for Human Rights by the Kawagib Alliance for the Advancement of Moro Human Rights in the Philippines recorded the displacement of over 400,000 individuals due to militarization in the last six years, many of them women and children.

Extrajudicial killings of rights activists are rampant, and this year Global Witness, an international network of environmental activists, has ranked the Philippines the third deadliest place in the world to engage in environmental rights advocacy.

Many of those killed protecting the environment were from national minorities. Between July 2010 and August 2016, 111 indigenous rights activists have been killed in the Philippines. Though overwhelming majority (102) of these killings took place under Aquino’s administration, ten of these recorded deaths occurred under President Rodrigo Duterte’s term, despite the fact that he has expressed his all-out support for the rights of the country’s national minorities.

“The attacks against indigenous peoples and Moros must not be allowed to continue. We are joining the Lakbayan to demand that he (President Duterte) make good on his promise (to stop all these attacks),” Dulphing Ogan, secretary general of Kusog sa Katawhang Lumad sa Mindanao (Kalumaran Mindanao) said. Ogan is a B’laan tribal leader from Mindanao, and his organization is the largest alliance of Lumad organizations in the island.

The indigenous peoples and Mores are supportive of the peace talks between the government and various armed groups in the country. To them, it is one of the venues where they can assert their right to self-determination.

Jerome Succor Aba from the organization Suara Bangsamoro (Voice of the Moro People) said that “while it is true that many indigenous and Moros are involved in the armed struggle, what we really want is peace for our people.” Aba is from the Iranon tribe, one of the 13 groups comprising the Moro peoples in the Philippines.

National minorities are also pushing for an independent foreign policy that will put an end to foreign control over the country’s politics and economy.

“Self determination means that our peoples are free to determine their future independent of foreign intervention,” Beverly Longid, who is a Kankanaey woman from the Cordilleras, said. She has been involved in the fight for self-determination of national minorities for more than two decades, and coordinates the International Indigenous Peoples Movement for Self Determination and Liberation (IPMSDL), a global network of indigenous rights activists and advocates.

“This right is compromised because of global neoliberal economic policies that powerful countries like the United States are ramming down our throats,” Longid said.

More work to do

Amid all these, national minorities do recognize that there have been several positive developments under Duterte.

“His (Duterte’s) stand against destructive mining is laudable,” Malayao said.

“The government’s commitment to the peace process with the Moro revolutionary groups as well as the CPP-NPA is a good sign. This gives us a chance to address the root causes of armed conflict,” Aba said.

Recently, several thousand Lumad from Agusan Sur province were able to “reclaim” their territory and kick the military out of their ancestral lands. Even the president’s statements against foreign intervention in the Philippines is seen as a step in the right direction.

“We commend his (Duterte’s) stand against external influence,” Longid said.

“We are here to push for changes that will benefit national minorities and the country, and we are here to stay,” Aba said.

This article was originally published on Bulatlat, an alternative online news agency based in the Philippines.