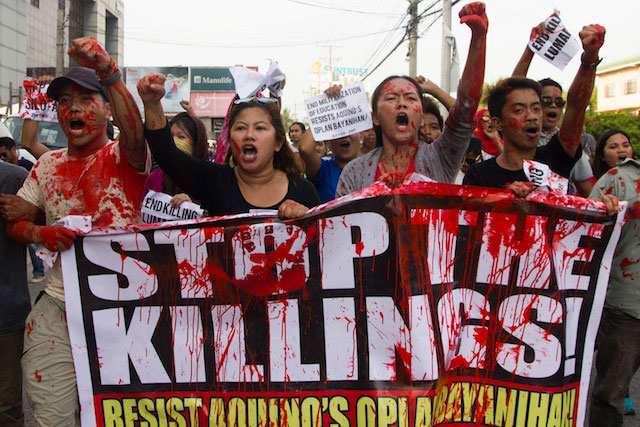 When Philippine President Benigno Aquino III assumed power in 2010, he promised to stop extrajudicial killings in the country. Six years later, with his term ending, he has yet to live up to his promise. Aquino won the presidency on an anti-corruption platform and a call for change and development. His mother, Corazon Aquino, was also the country’s president from 1986 to 1992. Aquino has been described by critics as an inept landlord president whose policies are elitist due to his insensitivity to the plights of his countrymen and women.

Though the Philippines is considered a middle-income country, and the Aquino administration has touted supposed economic growth year after year, poverty is still widespread, with one out of four people living below the poverty line. Primarily an agricultural country, three out of 10 people are employed in agriculture, yet seven out of 10 farmers have no land of their own to till. Indigenous peoples are in danger of losing their lands to large multinational companies interested in mining and energy projects, many of which are located within ancestral lands.

Salaries are low, with the Aquino administration turning its back on the farmers calling for higher wages. With the implementation of a program to add two additional years in secondary school and the rising cost of schooling, hundreds of thousands of students face the danger of not being able to continue schooling. Corruption is rampant in the government, with countless billions going into the pockets of government officials. Many of them are also from landed families themselves or have ties with corporate entities, making the Philippine government a platform for serving the interests of a chosen few.

With this much conflict and oppression in the Philippines, it would not be much of a wonder if criticism is abundant and social movements thrive in the country. Where there is oppression, there certainly will be resistance. Yet sadly, activists and their criticisms have been met by the government head-on with no less than bullets and blood.

The Philippines is considered one of the most dangerous countries in the world to engage in human rights advocacy. Front Line Defenders, a global organization that protects human rights defenders, ranked the country the second most dangerous for human rights advocates. Global Witness, an international advocacy group fighting against environmental and human rights abuses, says it is the third-deadliest for environmental and Indigenous rights activists. Committee to Protect Journalists, which promotes press freedom and the right of journalists to report the news without reprisal worldwide, sees it as the fourth–most dangerous country for journalists. In 2015, the US State Department concluded in its yearly report that “the most significant human rights problem continued to be extrajudicial killings … undertaken by security forces” in the Philippines.

Extrajudicial killing is not explicitly defined in international law. Some broadly define it as a killing that is not sanctioned by the courts and done outside the legal system. The Philippine Supreme Court further refined this definition to also consider the political affiliation of the victim, the method of attack and alleged involvement of state agents.

Admittedly, the body count is significantly lower than the previous administration’s gruesome record of 1,026 cases of extrajudicial killings. This does not, however, erase the fact that the killings continued to happen under the presidency of Aquino, and the government has failed to put a stop to them despite repeated pledges.

It isn’t only activists, lawyers and judges who have become victims. Civil society organizations have also experienced attacks on their development workers. The list of development workers killed include William Geertman, a Dutch NGO executive who has been living in the Philippines since the 1970s and whose organization was active in providing disaster relief and humanitarian services to farmers. He was shot in the back inside his office’s compound. Another much-publicized case was that of NGO executive Emerito Samarca. His organization implemented food security and alternative learning programs for Indigenous peoples in Mindanao. He was found hogtied and stabbed by paramilitary forces allegedly employed by the military.

Estrella Catarata is a spokesperson of Assert Socio-Economic Initiatives Network (Ascent), an alliance of non-government organizations implementing development projects in the country. Catarata finds it hard to understand why their development workers are being attacked. “You see, supposedly, the government should be doing what we are doing,” she said. “But because of the government’s negligence in rendering social and support services, we come in. So why are they killing us?”

Enemies of the State

The Communist Party of the Philippines (CPP), which leads the longest-running communist insurgency in the world, is perceived (along with its armed wing the New Peoples Army) by the Philippine government and military as the country’s primary internal security threat. The CPP’s influence is strongest in the countryside, where abuses against peasants and agrarian unrest are widespread. To counter the CPP’s influence, the military launched in 2010 its Internal Peace and Security Plan Bayanihan.

Despite claiming a “paradigm shift,” Bayanihan looks more like a re-hash of the previous administration’s internal security plan than anything else. The problem with both security plans is that both view many left-leaning organizations — especially of human rights advocates like Karapatan and labor and peasant organizations like Kilusang Mayo Uno (May First Movement) and the Kilusang Magbubukid ng Pilipinas (Peasant Movement of the Philippines) — as “fronts” of the CPP and, therefore, are legitimate targets in the government’s war to bring the Communists to heel. This, even though there is no hard evidence directly linking these human rights organizations with the CPP. Government forces have even gone so far as to declare these organizations and many of its leaders as “enemies of the state,” thereby legitimizing attacks on human rights advocates critical of government policies.

“Historically, human rights defenders and advocates are considered part of the opposition,” said Kristina Conti, a human rights lawyer and assistant secretary general for campaigns and advocacy of the Philippine-based National Union of People’s Lawyers. “The opposition, especially if not rich or powerful or ensconced as mainstream, is easier eliminated than ignored.”

Despite his campaign promises, Aquino has shown a marked lack of enthusiasm in ending extrajudicial killings and bringing the perpetrators of these crimes to justice. Most of the killers have been positively identified by witnesses as state agents or are employed the military or local politicians, yet only a very small percentage of cases have resulted in convictions. This breeds a culture of impunity that allows perpetrators to commit these crimes even in broad daylight, secure in the knowledge that they can get away with it.

Even the steps taken by Aquino have failed to address the issue. In January 2013, he created a task force to look into the issue of extrajudicial killings and prosecute those involved. “The task force was ineffective for lack of proper coordination and political will,” Conti told Truthout.

She added, “The conviction rate was horrible, at around 1 percent only. Also, it aimed to address prosecution of [those responsible for] extrajudicial killings and not prevention.” Even the Commission on Human Rights, tasked to monitor, document and investigate human rights violations, is underfunded and understaffed. Under Aquino, there were no reported convictions of suspected killers of human rights advocates.

A Lot of Explaining to Do

The military has routinely denied involvement in extrajudicial killings, even as witness after witness has positively identified state agents or paramilitary personnel under the control of the government as the culprits behind the killings. Catarata said, “Aquino seems to agree with the military” that human rights advocates should be killed because they were members of the New People’s Army (NPA) or sympathizers, “even if there is no evidence to support that claim.” The government and the military have even issued statements pointing to an internal “purge” by the CPP of its own forces, which the CPP has vehemently denied.

What Needs to Be Done

As Aquino steps down from office June 30, 2016, he is haunted by broken promises of solving past extrajudicial killings and preventing new ones from happening. Aquino’s performance with regard to human rights leaves much to be desired, with Human Rights Watch calling his record “disappointing due to failure to address impunity for the government’s rights violations.”

July 2016 also marks the start of Rodrigo Duterte’s term. Duterte, who won overwhelmingly on an anti-crime platform, has been criticized widely for his alleged use of “death squads” in eliminating drug pushers and petty criminals in Davao City, where he was mayor for two decades. He has also promised to fill the waters of Manila Bay with the “bodies of criminals.”

Though he has not yet bared his internal security plan, he has also not given any pledges to stop the spate of killings of human rights advocates, development workers and journalists, even stating recently that some journalists “deserved it” if they got killed.

It remains to be seen whether Duterte can do what Aquino did not, or he if will simply carry on doing what Aquino has done, which is nothing.

“What needs to be done,” said Conti, “is to overhaul the system, remove the policy, and prosecute the culprits. Only then can we stop the killings.”

This article first appeared on Truthout in 19 June 2016.  Read the original article here.