It is, indeed, April Fool’s Day.

At around 10 in the morning today, police and military personnel opened fire on more than five thousand protesting lumads (indigenous people)  and farmers who have been blockading the Cotabato-Davao highway in Kidapawan City, Philippines since March 30. The lumads came under the banner of the Apo Sandawa Lumadnong Panaghiusa sa Cotabato (Apo Sandawa Unity of Lumads in Cotabato). Organizers have not yet come up with a body count, but reporters say at least one person died and around 20 others, including some children, were wounded.

The reason behind the blockade is this: North Cotabato province has been declared in a state of calamity due to the El Nino drought which has ravaged the crops of thousands of farmers and has cost them millions of pesos in income. Many of these farmers are lumads who eke out a living farming in the hinterlands of North Cotabato. Because they were hard hit by the drought, they sought to petition the provincial government to provide them with assistance in the from of rice subsidies and farm inputs to stave off the hunger they and their families are experiencing (they also demanded an immediate end to military operations in their area). Thousands of sacks of rice are stored in the provincial government warehouse in Kidapawan City.

The Philippine national government earlier released a P238-million calamity fund for North Cotabato but Gov. Lala Mendoza stated that her administration has no plans of using this money to assist the hungry  and calamity-stricken lumad farmers. The good governor offered a deal to the farmers, instead: go home and we will give you three kilos (!!!) of rice every quarter.

It is, indeed, April Fool’s Day. However, I think this incident goes way beyond foolishness. This is sheer, utter madness, lunacy and bloody murder! I can recount several instances (Mendiola in 1987, Hacienda Luisita in 2004,  to name a few) where farmers and indigenous people have fought for their right to land and state assistance only to end up with the government bathing them with bullets and blood and handing the farmers their own heads on plates. How can this government stomach such atrocities? What kind of government do we have? How in the name of all that is just and holy can they shoot down the same farmers who sow and reap the food we put on our table?

Madness is when you wake up early in the morning, day in and day out, to earn a living in order to support your family only to find that the source of your livelihood was destroyed by a drought, and when you look to your left and right, there is no one to turn to. Lunacy is when you ask your duly-elected government for help, and it turns its back on you, never mind that it has hundreds of millions of pesos at its disposal. Bloody murder is when the government unleashes its pet bulldogs to ravage your ranks with their guns. 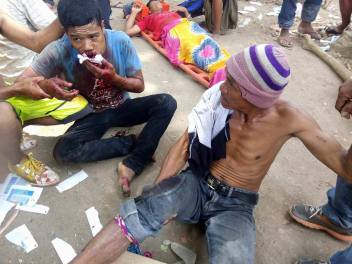 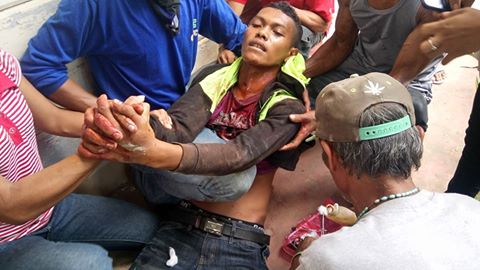 Some may find it foolish that the lumad farmers, because they were met with bullets and blood and were handed their own heads on plates, would then choose to take up arms and join a cause that beckons to them, waving its blood-colored flag, a cause that promises a better future just over the horizon. It’s probably foolish to expect our politicians and presidential wannabes to launch an immediate investigation, and imprison those responsible for this gruesome act. It’s probably foolish to expect people from all walks of life all over the world to  vehemently condemn this unconscionable act, and support efforts to seek justice for the victims of this bloody event. It is, after all, April Fool’s Day.

It gives you a terrible headache just to think about it, and makes you want to give up on everything in this country, hide in a hole and come out only after an apocalyptic nuclear war between the US and China wipes off the Philippines from the face of the Earth.

It is, indeed, April Fool’s Day. But then, we are not fools. And we do not give up.

Note: As of 7pm April 1 2016, 5 were confirmed dead (3 men and 2 women) in the Kidapwan Massacre, according to Anakpawis Partylist.